1. Some people argue that the development of technology is making our lives too complex, and the solution is for everyone to accept a simpler way of life without using that technology. To what extent do you agree or disagree?

2. Some people say job satisfaction is more important than job security, while others believe that having a permanent job is better than enjoying the job. Discuss both views and give your own opinion.

3. Nowadays, celebrities are more famous for their glamour and wealth than for their achievements, and some people say that this sets a bad example to young people. To what extent do you agree or disagree?

4. In some countries, TV programs are transmitted throughout day and night. Is it a positive or negative development?

5. More and more people want to buy famous brands of clothes, cars and other items. What are the reasons? Do you think it is a positive or negative development?

6. Some people think governments should spend money on measures to save languages with few speakers from dying out completely. Others think this is a waste of financial resources. Discuss both views and give your own opinion.

7. Some people argue that governments should not pay money for the international aids when there are some disadvantaged people in their own country, such as the homeless and the unemployed. To what extent do you agree or disagree?

8. Some experts think that all students should learn musical instruments. To what extent do you agree or disagree?

9. Some young people commit serious crimes, such as robbery or violent attacks. Some people think they should be punished in the same way as adults. To what extent do you agree or disagree?

10. The difference of age gap is greater between parents and their children. Do you think the advantages of this outweigh disadvantages?

11. In some countries, secondary schools aim to provide a general education across a range of subjects. In others, children focus on a narrow range of subjects related to a particular career. For today’s world, which system is appropriate?

12. Some think the best city is "vertical" city where people live and work in tall buildings. Others think "horizontal" city is better where there are few tall buildings. Discuss both views and give your own opinion.

13. Interviews form the basic selecting procedure for most large companies. However, some people think interview is not a reliable means of choosing who to employ, and there are some other better methods of selection. To what extent do you agree or disagree?

14. Nowadays women have full-time work as same as men. And logically men should share the household equally with women. To what extent do you agree or disagree?

15. City dwellers seldom socialize with their neighbors today, and the sense of community has been lost. Why did this happen? And how can this be solved?

16. Nowadays, the gap between the rich and the poor is becoming wider in some countries of the world. What problems can this situation cause? What solutions should be taken?

17. People’s shopping habits depend more on the age group they belong to than other factors. To what extent do you agree or disagree?

18. In some countries, it is illegal for employers to reject job applications for jobseekers’ ages. Is it a positive or negative development?

19. Lectures were used in the past as an old way of teaching a large number of students. As new technology is now available for education, some people suggest that there is no justification for lectures. To what extent do you agree or disagree?

20. Some working parents tend to send their children to childcare centers because they think their children can get good care there. However, other parents think some family members like grandparents can do this job. Discuss both views and give your own opinion. 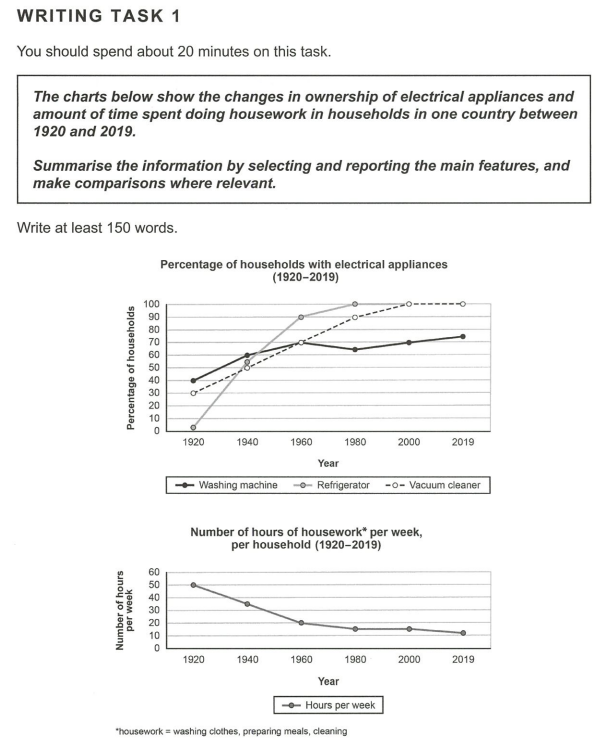 It is indicated in the first line chart how proportions of families with three electrical appliances had changed respectively from 1920 to 2019 in a certain country. To begin with, the percentage of families owning refrigerators increased rapidly from around 0% in 1920 to 100% in 1980, and then stabilized until 2019. The similar trend happened in data of vacuum cleaners, with growing up sharply from 30% to 100% (1920-2000) and thereafter leveling up by 2019. By contrast, the figure of washing machines only rose by 30% (40%-70%) in the first four decades, and in the next 20 years it declined by 10% to 60%, followed by a steady ascent in the last 40 years, finally arriving at around 75% in 2019.

How many hours people in this country spent on housework weekly of the same time span is revealed in the second line chart. The number obviously had continuous declines, with decreasing drastically before 1960 from 50 to 20 hours and then dropping slightly by only 10 hours by 2019.

In summary, with more and more households owning related electrical appliances, people correspondingly spent less and less time on housework. After 2000, all families had vacuum cleaners and refrigerators, but washing machines were not that popular. 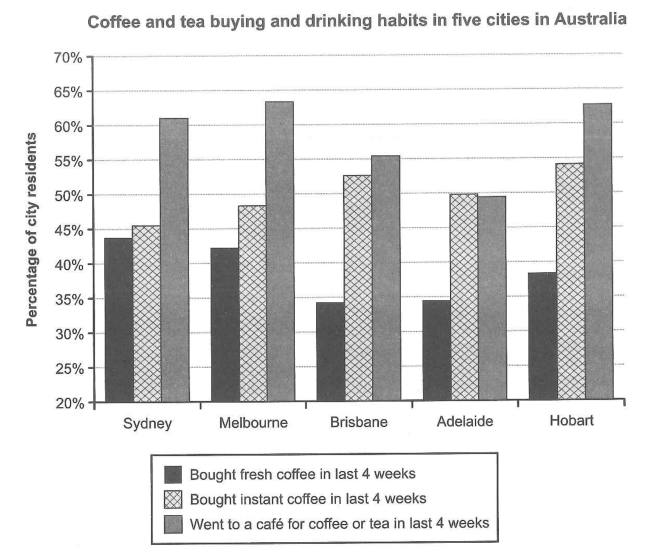 The statistics (measured as a percentage) of people’s drinking and buying habits on coffee and tea in five Australian cities from a survey is indicated by this bar chart.

To begin with, 44% residents in Sydney bought fresh coffee in last 4 weeks, a bit higher than Melbourne (43%) and Hobart (38%) respectively. Nearly 35% of people living in Adelaide did the same thing, slightly more than Brisbane (34%).

Additionally, in terms of those who bought instant coffee in last 4 weeks, figures of all five cities are higher than 45%, with Hobart accounting for the highest proportion at 54%, followed by Brisbane (53%), Adelaide (50%), Melbourne (48%) and Sydney (46%) in a decreasing order.

More interestingly, as for people who went to a café for coffee or tea in last 4 weeks, proportions of 4 cities are more than a half, with Melbourne occupying the largest percentage at 64%, Hobart 63%, Sydney 61%, and Brisbane a little more than 55%. Meanwhile, the figure of Adelaide is a slightly lower than 50%.

In summary, in 4 cities excluding Adelaide, the most popular habit is going to a café for coffee or tea since related figures are noticeably higher than the other two options. In the meantime, in Adelaide instant coffee is prevalent because almost half local people chose it during last 4 weeks. In contrast, purchasing fresh coffee is the last choice for people in all these 5 cities.